We really kicked into go-home mode on Tuesday. That mood was helped by the weather. After having such amazingly good weather most of the trip, this was the view as we drove the normally scenic North of Superior route:

We'll just have to rely on the good memories (and pictures) from our way West on May 27. We ended the day as we had ended our first day on the road, at the Sault Ste Marie Walmart. There were some 20 other campers there tonight; the roads and camps are much busier now than a month ago.

It will be of interest to some that White River Ont now had a strong cellular signal for our Koodo-powered phones. This area has been a black hole for most cell reception for, well, forever. 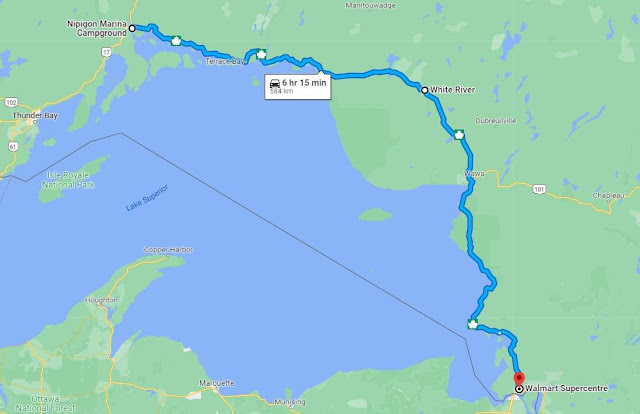 Wednesday cleared up a lot, but we were going home, so kept going steadily (with breaks), being slowed by quite a bit of construction on Hwy 17 between Sault Ste Marie and Sudbury. We pulled in to our driveway a little before 5pm. 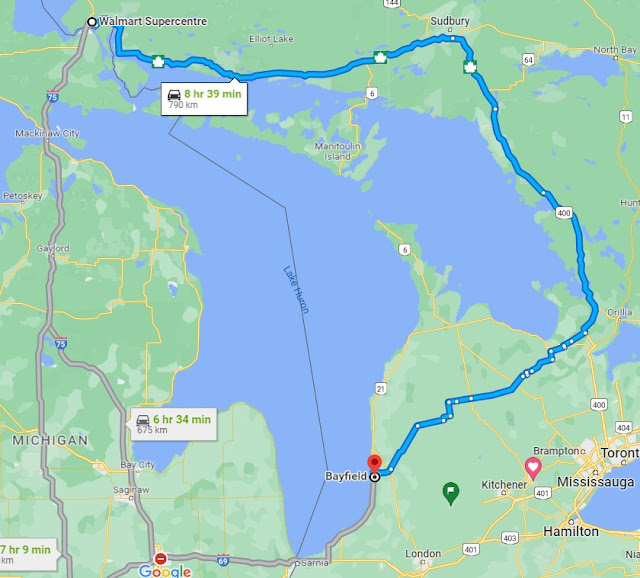 The trip may seem rushed to some, especially the home stretch. We were ready to be home again though, being away almost exactly 6 weeks.

A number of people have been interested in the fuel prices etc:

- diesel averaged $2.17 per litre, with Ontario and BC having the highest prices. Prices were somewhat high in the Yukon apart from Whitehorse, reaching $2.45 in Eagle Plains, an outpost just short of the Arctic Circle. That's more understandable than BC and Ontario prices though. Luckily the Prairie province prices were noticeably lower, and helped keep the average down.

We had no major problems (except for the breakdown of Cathie's cell phone), and we got to places we've only dreamed about. A great trip we'll remember for a long time.